Adds 400,000 more train seats every week for people in the GTHA

Ontario’s Government for the People is keeping its promise to get people moving faster by adding GO train service to reduce congestion in the Greater Toronto and Hamilton Area.

John Yakabuski, Minister of Transportation, announced the largest GO service increase in five years. Starting September 24, travelers on the Lakeshore corridors will have access to 220 new trips per week, an increase of nearly 18 per cent.

“Your government is making life easier for those travelling within the GTHA,” said Minister Yakabuski. “We are making GO trains run more frequently and increasing seat capacity — more than 400,000 additional train seats will be available every week. This will bring immediate relief to the thousands of travelers who use GO Transit in the area.” 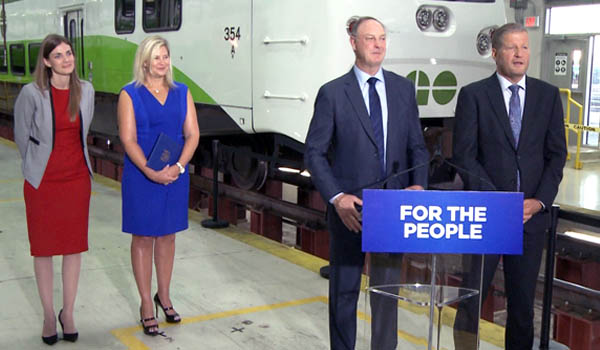 Travelers on the GO Lakeshore corridors will benefit from:

27 new train trips on GO Lakeshore East, an increase of 21 per cent, which will double midday, weekday service between Oshawa and Union. This brings the line to 15-minute midday service frequency.
17 new weekday train trips on GO Lakeshore West, with six trips during rush hour and 11 in the midday period between Oakville and Union Station, representing a new train every hour. This is an increase of 50 per cent more midday trains and nearly 14 per cent overall.
“With hundreds of new trips between our busy morning and evening peak travel periods, we’re taking the thinking out of travelling — whether travelling east or west, from dawn to dusk,” said Phil Verster, President and CEO of Metrolinx. “Our customers along the Lakeshore lines can leave their schedules behind and just GO for much of the day.”

On the Kitchener line, GO is adding a new morning, rush hour train trip from Malton GO to Union Station. GO will also increase seat capacity on two morning and two evening peak trips that originate and end at Kitchener GO, expanding the length of the train from 10 to 12 cars.
GO bus customers now have a new bus stop at Highway 404 and Major Mackenzie in Richmond Hill. Customers will see more than 180 new weekly bus trips across the region.
“Your government is making sure the people of Ontario have a safe and efficient transportation network,” said Minister Yakabuski “Our plan to get people moving includes delivering two-way, all-day GO service. We look forward to improving the transit experience for all Ontarians.”