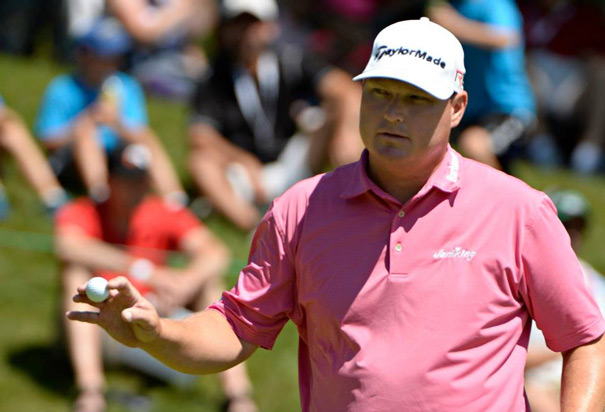 Chad Campbell is a fan of Glen Abbey Golf Club; his play today could help explain the Texas native’s affinity for the home of the 2015 RBC Canadian Open. Campbell’s bogey-free round included nine birdies to take the lead at the 106th playing of Canada’s National Open Championship.

“I really enjoy this course; it’s playing great and in great condition, the greens are perfect and the fairways are super fast,” said Campbell, when asked about returning to Glen Abbey. “I think this is my third or fourth time to play on this course. I’ve always enjoyed it. I just feel comfortable on it.”

The four-time PGA TOUR winner finished T16 at the 2013 RBC Canadian Open at this same course. At 130, his two-round score is the second lowest in Glen Abbey’s storied past. His 9-under 63 performance was one stroke shy of tying the course record.

“It would have been nice to make that one. But after driving the left rough, I was pretty happy just to have it up on the green,” said Campbell of his attempt to equal history.

Brian Harman of Sea Island, Ga., maintained his hold on second place and sits two shots back of the lead at 132. He notched seven birdies en route to a 5-under 67 and is confident heading into the third round.

“I drove it well again, putted it well again and I managed my game. I still made a couple of bogeys, but I came back nicely from both of them. I’m excited with the way I’m playing and I look forward to the weekend.”

David Hearn climbed the leaderboard, carding a bogey-free 8-under 64 to move into a tie for third with Johnson Wagner. Hearn, a native of Brantford, Ont., carded a pair of birdies on his two final holes to move to 11-under, three back of the leader.

“I gave myself a lot more chances today. I hit a lot more greens and my putter definitely got hot,” explained Hearn on his push up the leaderboard. “Making those two birdies at the finish felt really, really good. So I’m happy with where my game’s at and excited for the weekend.”

Despite playing in his 13th RBC Canadian Open, Hearn remains appreciative of the Canadian crowds. Droves arrived at Glen Abbey donning the colours of their national flag on Red and White Day to cheer on their country’s golfing talents.

“The fans have been incredibly supportive. Every green we walk up to, they’re cheering you on and they want to see you do well. So I’m going to do everything I can to keep playing well and to give them lots to cheer about.”

With an ace on No. 4, Ricky Barnes gave the crowd another reason to cheer. With the hole-in-one, the Arizona native won a BMW i8 though BMW Hole-in-One @ the 4th Hole.

“It was a perfect 8-iron. I think the yardage was 165 into a little breeze and it just landed right in the hole and never came out.”

Graham DeLaet of Weyburn, Sask., was forced to withdraw in the morning due to a thumb injury sustained in the first round.

“It’s an important tournament to me. When it all came down to it, I felt if I could compete and still hit the ball well, I probably would have kept going. I’m going to go get some imaging done here and hopefully get back to Arizona and see the docs down there as well,” said DeLaet. Despite the injury, he was even through four holes before withdrawing.

Tee times for the third round of the 2015 RBC Canadian Open are available here.