CALGARY – Thailand’s Ariya Jutanugarn shot a 6-under 66 on Sunday to capture the CP Women’s Open by four strokes – an LPGA Tour-leading fifth victory of the year. The Bangkok native finished the championship at 23-under-par to tie the tournament low set by South Korea’s So Yeon Ryu in 2014.

The 20-year-old collected seven birdies, including four across a bogey-free back nine on Sunday, and counted a single bogey on the day. In total, she only tallied four bogeys during the entire 72- hole competition.

Despite a dominant performance, the champion focused more so on her mindset than her play on the course. 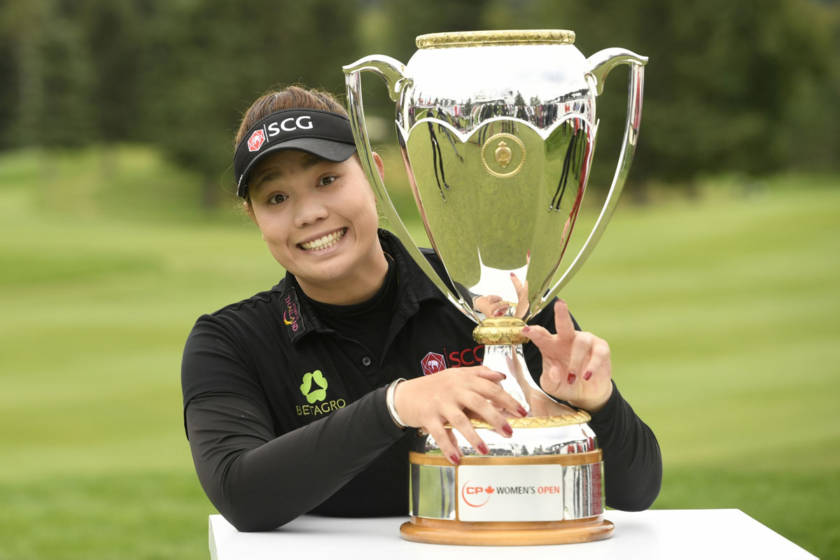 Jutanugarn claimed three consecutives victories in May, beginning at the Yokohama Tire LPGA Classic, before capturing her first major championship at the 2016 RICOH Women’s British Open in July.

After representing Thailand at the Olympic Games in Rio de Janeiro, where she had to withdraw with a knee injury, her return to the LPGA garnered a second straight win on Tour. She has battled through injuries and low points over the past three years, but credits a change within herself for her recent stretch of improved play.

“Before, I was thinking about making the cut, I wanted to win, I wanted to finish Top-10…everything was getting worse. It was never getting better. I just changed my focus to be honest with myself. I just really want to be happy on the course. That’s all I need.”

South Korea’s Sei Young Kim fired a 65 to finish second at 19- under, while compatriot In Gee Chun carded a 69 to place third at 18-under.

Hamilton’s Alena Sharp carried her strong play into the final round, shooting a 67 to finish the event fourth at 16-under. Her best career finish to date earned her the Sandra Post Medal as the low Canadian professional at Canada’s National Women’s Open Golf Championship.

“I can’t really describe how great it feels to play this well in Canada, because I have not played well at the Canadian Open in recent years,” reflected Sharp, who missed the cut in 2009 – the last time the Canadian Women’s Open was in Calgary. “To be here in front of the hometown crowd – it’s amazing. There’s no better feeling to have.”

World No. 3 Brooke Henderson of Smiths Falls, Ont., and Maude-Aimée Leblanc of Sherbrooke, Que., matched 69s to finish with shares of 14th at 11-under. The finish marks the first time three Canadians have ever finished within the Top-15 in the championship’s history.

World No. 1 and three-time winner Lydia Ko also had a 69 in her final round to finish tied for seventh.

Buoyed by the unwavering support of her home province, Jaclyn Lee of Calgary finished at 2-under 286 to claim the Marlene Streit Medal as the championship’s low amateur. The Golf Canada National Amateur Team member gained a wealth of experience and memorable moments in her first LPGA Tour event.

“I think I’ll remember making my first LPGA cut – being the low amateur,” said the 19-year-old when asked what she will remember from the experience. “And honestly, I’ve said it so many times, but the fans are seriously amazing. Really, that’s something that I did’t think I expected – to have so much support.”

To coincide with the Canada 150 celebrations, next year’s CP Women’s Open will return to the nation’s capital and the Ottawa Hunt and Golf Club from August 21 to 27, 2017. CP will announce its charity partner at a later date.

CANADIAN SCORES: The following are final Canadian scores for the 2016 CP Women’s Open.