Closing Ceremonies from the 18th Green

Using a loonie as his ball marker, Rory McIlroy fired a final round 9-under par 61 to win Canada’s National Open Championship, the RBC Canadian Open in his first appearance. 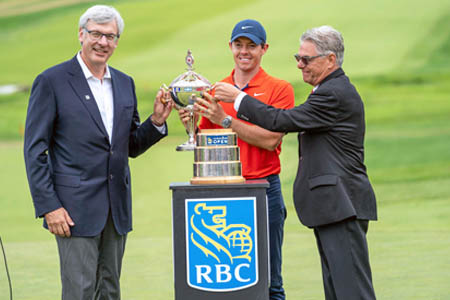 The 30-year-old entered Sunday’s final round sharing the lead with Americans Matt Kuchar and Webb Simpson. He started his round by lipping-out a chip for eagle on the first hole, en route to birding four of his first five holes. With the win the Northern Irishman claimed his 16th PGA TOUR title.

“It’s been a while since I played like this and sort of put my foot down, but it was so nice to do it today,” said McIlroy. “I’m very proud of what I’ve done today. Hopefully this sets up well for the rest of the year, too.”

McIlroy becomes only the sixth player to win the career Triple Crown, having won the U.S. Open in 2011 and The Open Championship in 2014. He joins an exclusive club that includes Tommy Armour, Walter Hagen, Arnold Palmer, Lee Trevino and Tiger Woods.

“The reception from the Canadian crowds have been incredible this week,” added McIlroy. “They couldn’t have been any better. They’ve been so welcoming all week. I can’t wait to come back next year.”

McIlroy is the first golfer to win the RBC Canadian Open on his first attempt since Chez Reavie in 2008 and the first European to capture the title since Sweden’s Carl Pettersson in 2010.

Adam Hadwin fired an even-par 70 in the final round, finishing as the low Canadian at 12-under par 268 on the tournament. Hadwin was awarded the Rivermead Cup for the fourth time of his career as low Canadian.

“The crowd was amazing all week,” said Hadwin. “That reception coming up 18 was something special. I pictured it with being a few more [strokes] under earlier in the week, but they were amazing. I’m just disappointed I couldn’t get it done in front of them.”