Ontario has updated its contract with Bruce Power and will proceed with the refurbishment of six nuclear units at the Tiverton-based nuclear generation station.

Nuclear refurbishment will boost economic activity across Ontario, create jobs, ensure savings for ratepayers and secure a clean supply of reliable electricity. The Bruce Power refurbishment project will make up to 23,000 jobs possible and generate about $6.3 billion in annual economic benefits in communities throughout the province. Ontario is home to a globally recognized CANDU nuclear supply chain with more than 180 companies employing thousands of highly skilled workers.

The government was further able to optimize the nuclear refurbishment schedule in order to maximize the value of existing nuclear units. The revised timeline will mean construction commences in 2020, rather than the previously estimated start date of 2016.

Accordingly, the updated agreement has achieved $1.7 billion in savings for electricity customers when compared to the forecast in the 2013 Long-Term Energy Plan (2013 LTEP). This means a reduction in forecast household electricity bills by about $66 each year over the next decade. The contract also protects the interests of electricity consumers by ensuring Bruce Power assumes full risk for any potential cost overruns or delays. 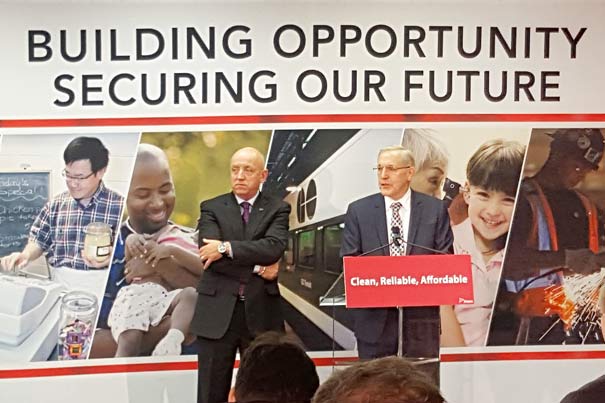 Key aspects of the updated agreement include:

Securing 6,300 MW of emissions-free, baseload generating capacity while deferring major project work to 2020, to maximize value of the units
Bruce Power would invest approximately $13 billion of its own funds and agrees to take full risk of cost overruns on refurbishments of the six nuclear units
Initial price for Bruce Power’s generation set at $65.73/MWh starting January 1, 2016. The average price over the life of the contract is estimated to be $77/MWh, or 7.7 cents per kilowatt hour (kWh).
Both prices are within the range assumed in the 2013 LTEP for refurbished nuclear energy and are lower than the average price of electricity generation in Ontario, which in 2015 was $83/MWh
Definitive contract off-ramps that allow the government to assess Bruce Power’s cost estimates for each reactor prior to its refurbishment and stop the refurbishment if the estimated cost exceeds a pre-defined amount
The province is achieving balance by contracting affordable, stable and reliable generation for residents and businesses while securing investments that will be a key source of local job creation and economic growth.

Securing clean, reliable baseload power for decades to come is part of the government’s plan to build Ontario up. The four-part plan is includes investing in people’s talents and skills, making the largest investment in public infrastructure in Ontario’s history, creating a dynamic, innovative environment where business thrives and building a secure retirement savings plan.