Politicians and OneEleven member companies will discuss the importance of supporting Canadian technology and talent.

Canada’s largest scaleup innovation hub, announced the grand opening of their space in downtown Toronto. The occasion was marked with a Tech Town Hall with Prime Minister Trudeau, and an evening reception with Toronto Mayor John Tory on Thursday May 11. OneEleven launched in 2013 to help Canada’s most promising high-growth startups commercialize their technologies and scale their operations by providing community, infrastructure and programming. Today’s grand opening event introduces the first phase of OneEleven’s new 250,000 square foot expansion at Front St. and Blue Jays Way in Toronto, which is the first building in the planned Oxford Properties Union Park innovation hub project. 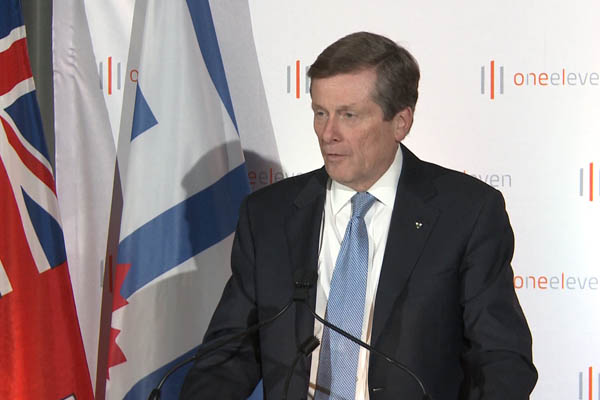 “OneEleven’s mission is to create the conditions for Canada’s next technology success story — the next billion-dollar technology company,” said Bilal Khan, Founding Managing Director of OneEleven. “We are creating an environment and building a community that encourages collisions and collaborations between some of Canada’s most sophisticated entrepreneurs, influential thought-leaders and disruptive private and public sector partners. By focusing our collective efforts towards helping high-growth startups commercialize their technologies and scale their operations here in Canada, we can secure a strong and innovative future for our country.”

OneEleven provides a highly-curated selection of startups with access to office space, shared resources, a strong network and a community of innovative leaders. Launched in 2013 in partnership with OMERS Ventures, the Ontario Centre of Excellence (OCE) and Ryerson University, OneEleven has supported over 40 companies such as Wealthsimple, Tulip Retail, Blue J Legal and Nudge.ai. A recently announced collaboration with RBC will build on this success by supporting programming and services at the new OneEleven space.

“We founded OneEleven with the vision of helping the next generation of Canadian tech startups compete and win on the global stage,” said John Ruffolo, Board Director of OneEleven and CEO of OMERS Ventures. “By creating an environment where the country’s brightest and most entrepreneurial minds could come together and not only build successful Canadian companies, but exchange ideas about the future of innovation and tech.”

Today’s Tech Town Hall with Prime Minister Trudeau will bring together the OneEleven community to discuss issues related to innovation, the challenges with scaling a business in Canada, and the startup community. The Prime Minister will also tour OneEleven’s new space and enjoy demos from OneEleven portfolio companies, Applied Brain Research (ABR), Dropbike and Soundpays.

The Tech Town Hall will be followed by the grand opening reception with Toronto Mayor, John Tory, who will deliver remarks regarding Toronto’s role in Canada’s tech industry and the planned Union Park development, and Minister of Economic Development and Growth, Brad Duguid, who will speak to Ontario’s plan to support and mentor the province’s technology and talent. Also in attendance will be OneEleven’s scale-up partners, Aviva, Bennett Jones, Deloitte, Fasken Martineau and Rogers; and growth ambassadors, CBRE, SAP and Teknion.

OneEleven was founded in 2013 with a board of directors that includes the CEO of OMERS Ventures, John Ruffolo, President and CEO of OCE, Tom Corr, and Ryerson University President and Vice-Chancellor, Mohamed Lachemi.