On January 1, 2018, many people across Ontario will see their wages rise to $14 an hour as the new general minimum wage takes effect. This change will help workers and their families who are struggling to get ahead in a changing economy.

Kevin Flynn, Minister of Labour, was at Toronto’s Yorkdale Shopping Centre today to highlight the minimum wage hike and other provisions of the province’s Fair Workplaces Better Jobs Act. 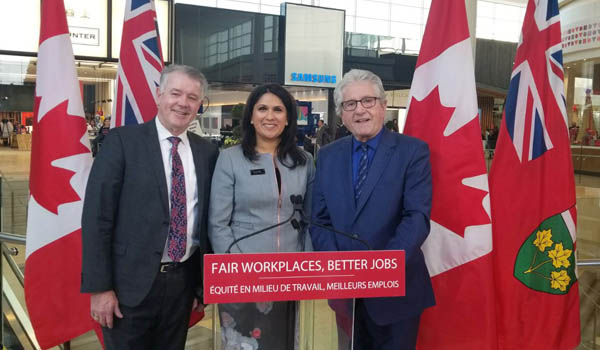 An estimated 55 per cent of all retail workers in the province will be getting a raise on January 1. This will help bring millions of people from the margins of the economy to a place where they are able to better provide for their families and get ahead.

Other changes coming into force on January 1, 2018 include:

•Ensuring workers are entitled to at least three weeks’ vacation after five years with the same employer, bringing Ontario’s vacation time in line with the national average
•Expanding the 10 days per calendar year for personal emergency leave to employees in workplaces with fewer than 50 employees, with at least two paid days per year for employees who have been employed for at least a week
•A new domestic or sexual violence leave of up to 10 individual days and up to 15 weeks of job protected leave; the first five days of leave in every calendar year would be paid
•Increased family medical leave from 8 to 28 weeks per year
•A new child death leave from any cause up to 104 weeks, and increased crime-related disappearance of a child leave from 52 to 104 weeks
•Changes to make forming a union and reaching a first collective agreement easier

Supporting workers and their families is part of Ontario’s plan to create fairness and opportunity during this period of rapid economic change. The plan includes a higher minimum wage and better working conditions, free tuition for hundreds of thousands of students, easier access to affordable child care, and free prescription drugs for everyone under 25 through the biggest expansion of medicare in a generation.