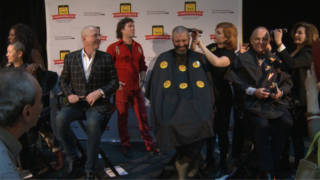 Hair-ticipants getting ready for their #NOHAIRSELFIE supporting world cancer day

Today, on World Cancer Day, The Princess Margaret Cancer Foundation’s #NoHairSelfie global fundraising campaign is expected to inspire thousands of hair-ticipants to actually or virtually shave their heads in solidarity with cancer patients worldwide who are undergoing cancer treatment.

“People with cancer often lose their hair during treatment,” says spokesperson and hair-ticipant Canadian magician David Ben. “By joining in the #NoHairSelfie campaign, I’m standing alongside those who are fighting cancer so they don’t have to stand alone.” For this former tax lawyer turned Canadian stage magician, the cause is personal: he lost his wife two years ago, his sister-in-law sixteen years ago, and his niece this past summer.

According to recent statistics, more than 40% of all Canadians will be diagnosed with cancer in their lifetime, and 1 in 4 is expected to die from the disease.

“Cancer is the leading cause of death in Canada,” says Paul Alofs, President and CEO, The Princess Margaret Cancer Foundation. “We are rallying people around the world to raise awareness and the much needed funds to advance cancer research. This year alone, 15 million people will be diagnosed with cancer worldwide; in only 15 years, this number will skyrocket to 22 million. The need to support cancer research has never been more critical.”

This year’s celebrity shavers include:
*Professor, politician and author Olivia Chow will be shaving the head of Paul Alofs, President & CEO, The Princess Margaret Cancer Foundation
*Rufus Wainwright, Canadian singer-songwriter and composer, will be shaving the head of his husband, Luminato’s Jorn Weisbrodt, in honour of Rufus’s mother, folksinger, Kate McGarrigle
*Gary Slaight, Canadian business leader, philanthropist and one of last year’s most successful hair-ticipants will help magician David Ben meet the razor head on. Mr. Ben has raised more than $175,000 for cancer research at The Princess Margaret.

Today, top fundraising shavers will undergo the razor at two events: an 11 a.m. press conference held at the Princess Margaret Cancer Centre’s 7th floor atrium, and at the #NoHairSelfie Buzz-Off & After Shave Party taking place at the Steam Whistle Brewery, today at 5 p.m. There is still time to sign-up as a hair-ticipant or to sponsor someone who has at www.nohairselfie.com.