Hope Air, the unique national charity that arranges free flights for Canadians who are in financial need and must travel to healthcare, celebrates its 100,000th flight today. Hope Air was established in 1986, and for the past 29 years has helped thousands of Canadians get to their crucial medical appointments.

Hope Air’s 100,000th flight was provided to 56 year old Richard Giroux of Hanmer, Ontario. Richard suffers from liver disease and is on the waiting list for a liver transplant. He must travel from Sudbury to Toronto every few months to see his doctors, but because of his condition he cannot sit for long periods of time – pain and fluid build-up make travel by car intolerable for Richard.

Through the charity service provided by Hope Air and its gift of flight, Richard is able to reduce his travel time from an onerous and very uncomfortable five hours to only 45 minutes. This ensures Richard arrives for his hospital appointments in a more rested state and his treatment outcome is likely then much better.

Hope Air arranges flights for clients to fly with an escort – often a family member – when it is deemed medically necessary by the client’s doctors, meaning that Richard’s wife Joanne is able to accompany him to Toronto to help him manage the travel. “It’s truly been a blessing. We are both on fixed incomes, so flying was never an option for us due to the costs. But now with free flights from Hope Air, so much pain, stress and hassle has been lifted,” says Joanne Giroux. 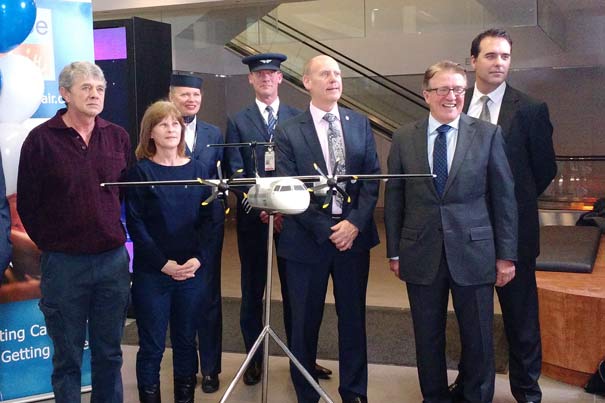 Hope Air Executive Director Doug Keller-Hobson says that families like the Girouxes are why Hope Air exists. “Our Clients live long distances from the vital healthcare they need. When you’re ill, worrying about how you will manage a painful, hours-long bus ride to get specialized care is a burden that we believe Canadians shouldn’t have to bear. But for many low-income Canadians, this is a reality they face – the financial cost of being sick and getting to treatment is huge for many families and adds to an already stressful situation,” Keller-Hobson says. Hope Air’s client surveys show that many clients would cancel or reschedule their appointments, postponing vital medical treatment that can have a significant impact on their health.

Hope Air’s airline partner Porter Airlines flies the Girouxes between Sudbury and Toronto’s Billy Bishop airport, close to Toronto General Hospital where Richard sees his doctors. “Porter flights make it that much easier,” says Giroux. “We get off our plane in Toronto and it’s a short ride to the hospital. We couldn’t ask for more than a quick 45 minute flight and a fast taxi ride to Richard’s appointments. We are so thankful for Hope Air!”

Porter Airlines President and CEO Robert Deluce is proud to help Canadians like Richard get to their medical appointments. “Stories like Richard’s are why Porter has contributed to nearly 2,000 Hope Air flights in the last two years alone. We know that a flight can make a huge difference to a family in need,” he says.