Hundreds of team members, partners and other guests gathered at ceremonies in Toronto and Ottawa to celebrate Porter Airlines’ 10th birthday. The airline’s first flights took place on October 23, 2006, connecting these two cities.

Porter has since grown to serve 23 destinations in Canada and the U.S. from a home base at Billy Bishop Toronto City Airport. It continues to receive international acclaim for its refined approach to service, including complimentary wine and beer on flights, and access to airport lounges for all passengers in select locations.

In 2016, Porter was selected as a top 10 international airline by both Travel + Leisure and Condé Nast Traveler magazines. It was also chosen as Best Regional Airline in North America by Skytrax. 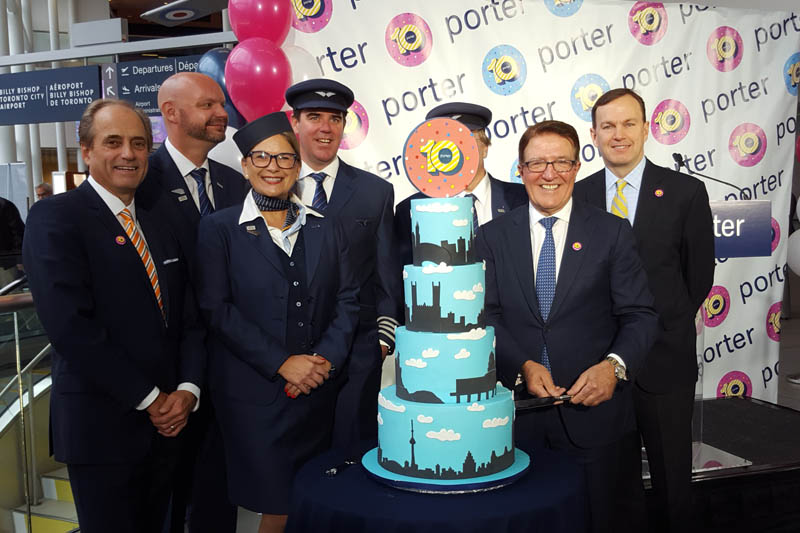 “Being in a position to celebrate 10 exciting years is first and foremost a credit to Porter’s 1,400 team members who are focused on providing the absolute best service we can every day,” said Robert Deluce, president and CEO of Porter Airlines. “We’re also incredibly thankful to our passengers and partners for supporting us since day one.

“Porter has shaken up the airline industry by providing needed competition on many routes, lowering the cost of travel for passengers and introducing an appealing service proposition with a combination of complimentary amenities for short-haul flights that was previously unheard of.”

Nearly 18 million passengers have flown with Porter over the last 10 years, while the airline travelled more than 240 million kilometers.

“Porter Airlines is a true Canadian success story,” said Geoffrey Wilson, CEO of PortsToronto, which owns and operates Billy Bishop Airport. “When Porter Airlines launched in 2006, the airport was servicing 25,000 passengers per year. In 2015, the airport welcomed 2.5 million passengers, was confirmed as the sixth-busiest airport in Canada servicing the U.S. and the ninth-busiest overall, drove economic output of more than $2 billion and accounted for 6,500 jobs directly and indirectly. This success is due in large part to the vision, commitment and hard work of Robert Deluce and his extraordinary team at Porter Airlines. On the occasion of the airline’s 10th birthday, we congratulate Mr. Deluce and his team on their success and look forward to many more years of partnership.”

Original crews from 2006 operated two commemorative flights today between Billy Bishop Airport and Ottawa International Airport to honour Porter’s first route. Each flight was welcomed at the respective airports by a traditional water cannon salute, where arches of water were sprayed overtop the aircraft by local fire services.

“A decade ago, Ottawa was honoured to be chosen as Porter’s inaugural destination,” said Mark Laroche, Ottawa Airport Authority President and CEO. He added, “since then, we have watched the airline grow, flourish, and build a loyal following of Ottawa customers who enjoy the exceptional customer experience Porter offers. The sky is the limit for Porter; we wish them continued success and look forward to being as important a part of their growth strategy for the future as we were at the very start.” 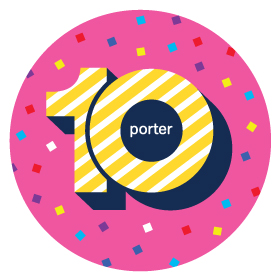 As a special commemoration of its 10th birthday, Porter is distributing for the first time a limited number of Mr. Porter raccoon brand mascots in plush format. These have been requested by customers since the Mr. Porter character first appeared as a sophisticated and fun representation of the airline in 2006. Sales of these special mascots are exclusive to the passenger lounges at Billy Bishop Toronto City Airport while supplies last.

Giveaways of free flights were also provided to one passenger on every flight for the last two days.