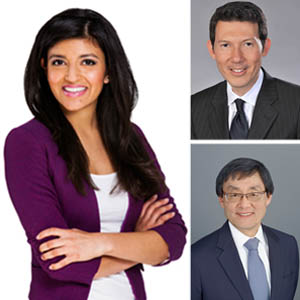 The nature of Canada’s—and indeed the world’s—economy is changing, moving toward knowledge-intensive activities and away from former pillars such as manufacturing. Knowledge is now recognized as the driver of productivity and economic growth, leading to a new focus on the role of information, technology and learning.
Air connectivity is a necessary prerequisite for any thriving economy based on information sharing and knowledge transfer. As such, airports and air carriers have a critical role to play in our nation’s prosperity.
Moderator Amber Kanwar (anchor and reporter for Business Day AM and The Disruptors), with Benjamin Smith (President, Passenger Airlines at Air Canada) and Howard Eng (President and CEO of Toronto Pearson International Airport), discuss Canada’s changing economic landscape, the vital role that air connectivity plays as an economic engine and how we can move forward together to ensure continued prosperity for the region, the province and the country at large.

Benjamin Smith (President, Passenger Airlines, Air Canada)
Ben Smith was appointed President, Passenger Airlines in August 2014. In this role, Ben has overall responsibility for the commercial strategies and financial performance of the airline and its subsidiaries including oversight for revenue generation, operations and customer service activities.
Air Canada’s principle objective is to be a Global Champion and be among the best global airlines, and Ben’s key priorities are developing Air Canada’s transformational strategies towards sustained profitability. With international growth as a cornerstone, he is the architect of the airline’s strategic and diversified global network expansion to more than 200 destinations on six continents. He is also the architect behind fully developing Toronto Pearson as Air Canada’s primary global hub, Vancouver as a premier gateway to Asia Pacific and Montreal as a gateway to French international markets, where the airline’s global networks are fully integrated to its extensive domestic and American transborder networks. Moreover, Ben led the commercial analysis which concluded in the decision to purchase the technologically leading advanced Bombardier C Series aircraft, which will further strengthen Air Canada’s competitive position.
Under Ben’s leadership, Air Canada Rouge, the lower-cost airline that competes effectively in the leisure market worldwide, was launched, and the Air Canada Leisure Group was created to leverage the strengths of Air Canada, Air Canada Rouge, and Air Canada Vacations. He was chief negotiator during the airline’s labour negotiations with the two unions representing pilots and flight attendants which culminated in landmark ten-year agreements with both groups.
Ben’s previous executive positions at Air Canada included Executive Vice President & Chief Commercial Officer, Vice President-Network Planning, and President & CEO, Air Canada Vacations.
Ben began his airline career when he joined Air Ontario, one of Jazz Aviation LP’s predecessor regional airlines, as a Customer Sales and Service agent in 1990. He left Air Ontario in 1993 to open a retail corporate travel agency which he owned and operated for eight years. Ben rejoined Air Canada in 2002 as Managing Director of Tango, after overseeing the development and launch of Air Canada’s innovative and separately branded, low-fare operation. Tango subsequently evolved into Air Canada’s well-known Economy fare brand when the airline pioneered the successful, simplified fare model which is still in place today. Ben holds a Bachelor of Arts in Economics from the University of Western Ontario.

Howard Eng (President & CEO, Greater Toronto Airports Authority)
Mr. Howard Eng assumed the position of President and Chief Executive Officer of the Greater Toronto Airports Authority (“GTAA”) on March 29, 2012. The GTAA manages and operates Toronto Pearson International Airport, Canada’s largest airport. As head of the GTAA, Mr. Eng will focus on the strategic direction of Toronto Pearson, working to build North America’s premier gateway airport.
Mr. Eng was the Executive Director, Airport Operations of the Airport Authority Hong Kong up to March 2012. He joined the Airport Authority in April 1995 and was appointed as Airport Management Director in December 2000. He was a Director of Hong Kong – Zhuhai Airport Management Company Limited. Mr. Eng was integral in moving Hong Kong onto the world’s stage as a global hub and one that enjoys consistently high ratings from guests, including a top rating from Skytrax.
Before joining the Airport Authority Hong Kong, Mr. Eng was Vice President of Operations, Edmonton International Airport in Canada from 1993 to 1995. Prior to that, he held various positions with Transport Canada. Mr. Eng holds Bachelor’s Degrees in Science and in Commerce.

Amber Kanwar (Anchor and Reporter, BNN)
Amber Kanwar is an anchor and reporter appearing on Business Day AM and The Disruptors. Kanwar is a relentless digger, always looking for ways to break news and bring exclusive information and insight to BNN’s audience.
Amber is a homegrown product of the BNN newsroom, working her way up from intern, to segment producer, and now to anchor. She specializes in equity markets and is constantly seeking out stocks flying under the radar, trends that are about to emerge, and curating research to make it accessible to viewers. She is a leader in breaking news; reporting on Canada’s booming online gaming sector, activist interest in one of Canada’s biggest pipeline companies and one of the most plugged in reporters on the turnaround effort at BlackBerry.
Amber has interviewed CEOs from across Canada’s C-Suite including Blackberry’s John Chen, Manulife’s Don Guloien, and Ontario Teacher’s Pension Plan’s Jim Leech to name a few. Prior to joining BNN, Amber completed her Master of Journalism degree at Ryerson University. Her Master’s thesis was an investigative story into the fertility industry that broke a national scandal and appeared on the front page of The Globe and Mail.
When Amber is not poring over analyst reports, you can find her at Monk’s Café enjoying the big salad or duck hunting in West Monroe, Louisiana.