Today, Ontario passed landmark legislation that will bring more fairness to Ontario workplaces and create more security and opportunity for vulnerable workers and their families.

The Act will raise the minimum wage, ensure more fairness for part-time and contract workers, expand personal emergency leave and step up enforcement of employment laws. 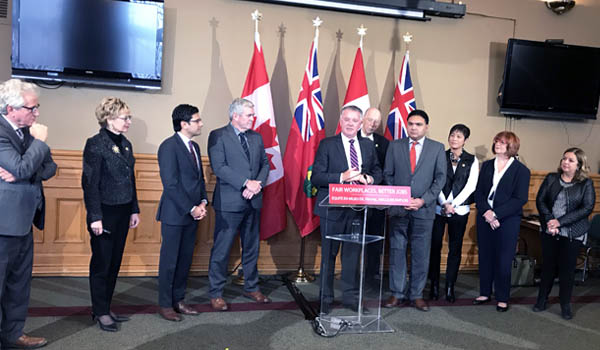 The government is also expanding family leaves and adding measures to ensure that employees are not misclassified as independent contractors, ensuring they get the benefits and protections they deserve.

To enforce these changes, the province is hiring up to 175 more employment standards officers and is launching a program to educate both employees and businesses about their rights and obligations under the Employment Standards Act, 2000.

Ontario’s plan to create fairness and opportunity during this period of rapid economic change includes raising the minimum wage, free tuition for hundreds of thousands of students, easier access to affordable child care, and free prescription drugs for everyone under 25 through the biggest expansion of Medicare in a generation.