Investments in Canada’s infrastructure today will bring Canadians good jobs, a cleaner environment and thriving communities for years to come. Infrastructure is key to helping the middle class get to work and back faster, while allowing Canada’s economy to grow and prosper over the long term.

Today, at an event at the Go Transit Don Yard, the Honourable Amarjeet Sohi, Minister of Infrastructure and Communities, highlighted the measures in the Fall Economic Statement, which proposed $25.3 billion in new investments in public transit to build new urban transit networks and service extensions that will transform the way that Canadians live, move and work. With the additional funding for public transit, Canadian communities will be able to shorten commute times, reduce air pollution and grow Canada’s economy. 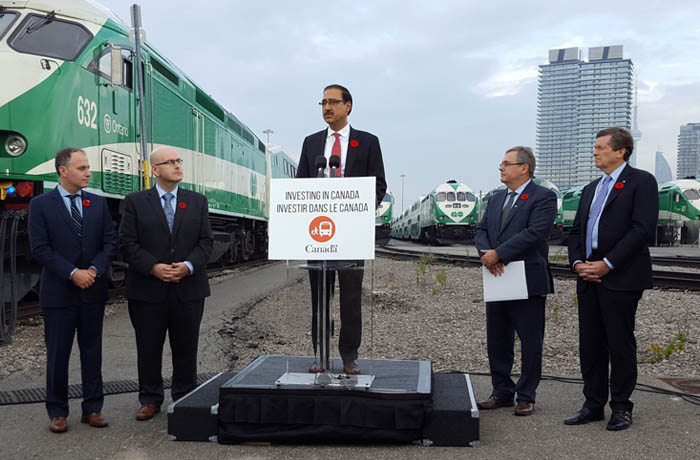 Taking into account existing infrastructure programs, new investments made in Budget 2016 and the additional investments contained in the Fall Economic Statement, the government will be investing more than $180 billion in infrastructure over 12 years. Investments will be made in public transit, green and social infrastructure, transportation infrastructure that supports trade, as well as rural and northern communities.

In the Fall Economic Statement, the government also proposed to establish the new Canada Infrastructure Bank, an additional tool for provinces, territories and municipal governments should they see an opportunity to leverage private sector investments to build more infrastructure projects in communities.

As the Government of Canada finalizes the details of its long-term plan, we will continue to work with our provincial, territorial and municipal partners to ensure the successful implementation of the first phase. Ongoing discussions will help us meet today’s unique challenges and prepare us for a prosperous future.