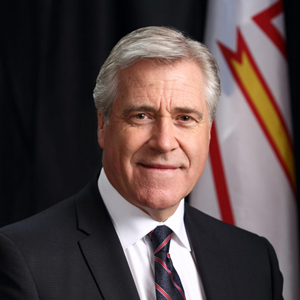 ” The Way Forward: Sustainable Growth in Newfoundland and Labrador “

Newfoundland and Labrador is a place of stark contrasts: rich resources, inventive people, and persistent challenges. Historic levels of investments over the past decade did not change many of the province’s most important outcomes in health and education.

Under the leadership of Premier Dwight Ball, the Government of Newfoundland and Labrador is redesigning itself to address its fiscal and socioeconomic challenges. On November 18th, Premier Ball will discuss his government’s vision and the way forward to ensure prosperity for the province.

Born in Deer Lake, Newfoundland and Labrador, Dwight Ball and his four siblings were raised by hard working parents. His father, William, was an advocate for loggers throughout the province, and his mother, Evelyn, has worked her entire life. They instilled in him a strong work ethic and a tradition of community involvement.

At the age of seventeen, Dwight headed to St. John’s to study pharmacy, and returned to Deer Lake after graduation, opening several pharmacies on the west coast. Mr. Ball earned significant professional recognition as a pharmacist, becoming President of the Canadian Pharmacists’ Association, representing Canada’s pharmacists on the world stage, and receiving the Bowl of Hygeia, the highest honour for a community pharmacist.

Mr. Ball then diversified his business interests to includepersonal care homes, real estate development, and venture capital investments, creating hundreds of jobs in Newfoundland and Labrador. He received Employer of the Year awards in both Deer Lake and Springdale for his involvement in employment programs for persons with disabilities. He served as President of the Deer Lake Chamber of Commerce and a Director of the Deer Lake Airport Authority, Western Regional Hospital Foundation and the Deer Lake and Area Food Bank.

Mr. Ball was elected to the House of Assembly in 2007 and again in 2011 to represent his home district of Humber Valley. In January 2012, he became interim party leader and Leader of the Official Opposition, and was elected party leader in 2013.

On November 30, 2015, Dwight Ball was elected Member of the House of Assembly for his redrawn home district of Humber-Gros Morne, leading his party to victory in the general election and forming a majority government. On December 14, 2015, Dwight Ball was sworn in as Premier of Newfoundland and Labrador, Minister for Intergovernmental Affairs and Minister of Labrador and Aboriginal Affairs.

Dwight lives in Deer Lake with his wife, Sharon. He has one daughter, Jade. In his spare time, he enjoys hockey, salmon fishing and snowshoeing.