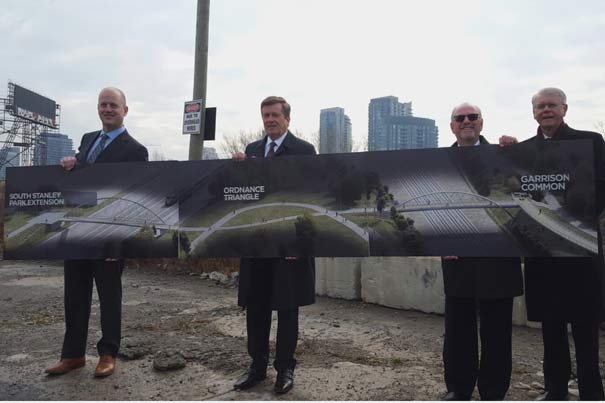 BUILD TORONTO, in partnership with the City of Toronto, announced today that a team led by Dufferin Construction Company, a division of CRH Canada Group Inc., will design and build the new Fort York Pedestrian and Cycle Bridge. The $19.7-million project will provide a significant benefit for both pedestrians and cyclists, improving the linkages between area communities and local parklands. Construction will commence in the spring of 2016 and is scheduled for completion in the spring of 2017.

“The Fort York Pedestrian and Cycle Bridge Project is an investment in smart infrastructure that connects communities, gets people moving across Toronto and is a part of the City’s plan to revitalize the waterfront,” said Mayor John Tory. “This is a great example of creatively using our public spaces to best serve our growing city.”

The winning design, a two-part bridge that will be the first stainless steel bridge to be built in North America, extends north-south across two railway corridors in the downtown just east of Strachan Avenue. One bridge will span from the future South Stanley Park Extension on Wellington Street over the north Georgetown railway corridor and land on the north side of the future Ordnance Triangle Park. The second bridge will begin on the south side of the Ordnance Triangle Park and span over the south Lakeshore railway corridor, landing on the Fort York grounds.

“This is an important piece of infrastructure, an innovative bridge that will connect three of our parks and ultimately our downtown neighborhoods,” said Councillor David Shiner (Ward 24 Willowdale) BUILD TORONTO Board Chair and Planning and Growth Management Committee Chair. “This is the first time we will construct a bridge like this in Toronto, one that is creative, accessible and great for both pedestrians and cyclists. Not only does it connect our green spaces, but it crosses above two railway corridors and will transform the way we move around downtown.”

“This is a unique opportunity for BUILD TORONTO as we are overseeing the development of an infrastructure project for the City,” said BUILD TORONTO President & CEO Bill Bryck. “Using a Design-Build procurement model for this project has allowed us to realize a high-quality and cost-effective solution that will enable a more livable city.”

“The City is investing in infrastructure that connects neighbourhoods, makes Toronto more walkable and bike friendly, and creates a north-south greenspace connection from Trinity Bellwoods all the way to the waterfront,” said Toronto Councillor Mike Layton. “This major infrastructure project will not only create a new connection with great vantage points for the local neighbourhoods around King Street West, Liberty Village and Fort York, it will improve connections with the rest of the City.”

The Dufferin Construction Company team was selected through a rigorous evaluation process of proposals from three design-build teams shortlisted for the Request for Proposal to design-
build the bridges. For more information on the process, visit http://fortyorkbridge.mmm.ca.

BUILD TORONTO Inc. is an independent real estate and development investment corporation established by the City of Toronto to create value from the City’s underutilized real estate assets. The company has a unique focus on meeting its City-Building Strategic Priorities, as well as generating a reasonable net financial return for the City. BUILD TORONTO reports to a professional Board of Directors and operates with a vision to develop surplus and underused City land to attract commercial development, create desirable jobs and improve the livability of the City. BUILD TORONTO officially launched and started full operations in May 2010. For more information, visit www.buildtoronto.ca.