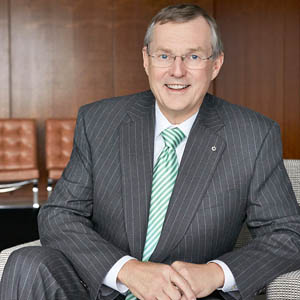 The Premier’s Business Advisor provides details on the province’s approach to supporting Ontario bids for Amazon.

Biography:
Ed Clark retired as Group President and CEO of TD Bank Group on November 1, 2014 after 12 years as CEO. Twice during his tenure, Ed was recognized as one of the world’s 30 Best CEOs by Barron’s Magazine. In 2016, he was inducted into the Canadian Business hall of Fame.

He now serves Premier Kathleen Wynne in the capacity of the Premier’s Business Advisor.

He was the 2010 Cabinet Chair for United Way Toronto, and is currently a member of the Chair’s Advisory Council for Habitat for Humanity Toronto. He provides support to WoodGreen Community Services, an organization that delivers programs to build sustainable communities in the Toronto area, and to Egale, Canada’s only national charity promoting lesbian, gay, bisexual, and trans (LGBT) human rights. He was acknowledged by GTA Association of Fundraising Professionals (AFP) with the 2011 Outstanding Philanthropist award.

Ed is a member of the Board of Trustees of US public policy organization, the Brookings Institution. He is also a Director of Thomson Reuters, and Chair of the Vector Institute.