The votes are in and the CAA Worst Road for 2019 is Eglinton Avenue East in Toronto.

Taking the second and third place spots are Riverdale Drive, in the community of Washago (north of Orillia) and Dufferin Street in Toronto.
Toronto’s Eglinton Avenue East is currently undergoing one of the largest transit expansions in North America, which has significantly impacted road conditions during construction.

Voters cited crumbling pavement, potholes, traffic congestion and poor road signage as the main reasons for concern. With Eglinton Avenue West appearing on the Top 10 list last year, the entirety of this road appears to be of concern.

“While the condition of Eglinton Avenue is of concern to the public, many of the challenges for all road users will hopefully be resolved with the completion of the Eglinton Crosstown project,” says Raymond Chan, government relations, CAA South Central Ontario. “The gridlock and congestion that many motorists are currently experiencing should ease as construction winds down, repairs to the road are made and as more people choose new transit options.” 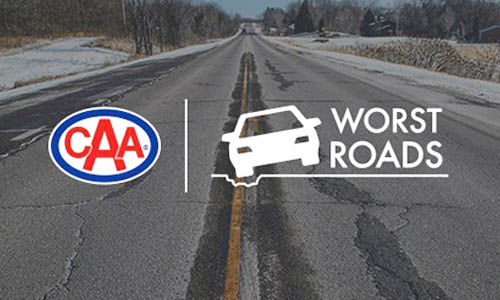 Two notable changes in the list over the past year are; Duckworth Street in Barrie dropping off the Ontario Top 10 list and Hamilton’s Burlington Street East dropping from first to sixth place.

“Those campaign success stories are because governments are prioritizing infrastructure through multi-year capital investments,” added Chan. “CAA will continue to advocate for longer-term dedicated infrastructure funding to help municipalities prepare, plan, budget and execute on repair backlogs and capital projects.”

In Ontario, 53 per cent of municipalities saw roads in their community nominated. Drivers accounted for over three-quarters of the votes cast, while roughly 12 per cent of votes were from cyclists and a further 12 per cent from pedestrians.

The primary reason for selecting their road: 85 per cent cited potholes or crumbling pavement, and 6 per cent chose congestion as their biggest concern.

“ORBA is pleased to partner with CAA on the 2019 Worst Roads Campaign. Using a technical checklist, ORBA members inspected and verified the condition of the identified roads across Ontario. This effort enabled ORBA and CAA to collect information as to why the road was chosen and to validate the issues raised,” said Andrew Hurd, ORBA.

The CAA Worst Roads campaign is a platform for Ontarians to make roads safer by helping municipal and provincial governments understand what roadway improvements are important to citizens, and where they need to be made.

For the full list of 2019 Worst Roads, please visit caaworstroads.com