A study conducted ahead of CAA’s Worst Roads campaign underscores how Ontarians feel about the state of their roads. Seventy-one per cent of those surveyed say they are concerned about the condition of roads, while 60 per cent of respondents don’t believe that roads are being repaired in a timely manner.

The data reinforces the campaign’s importance, says Raymond Chan, government relations specialist for CAA South Central Ontario (CAA SCO). “The simple act of participating in the CAA Worst Roads campaign can help various levels of government understand what roadway improvements are top of mind for road users, and where improvements could be prioritized.” 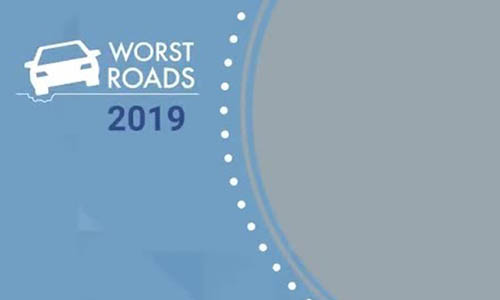 The study also found that while most regularly see roads in need of repair, 67 per cent of respondents stated they took no action to get them repaired. The CAA Worst Roads campaign is designed to be an easy forum for Ontarians to engage and take action on issues that impact them.

“We want to know what roads are seen as pain points for Ontarians. Whether the issue is congestion, potholes, road signage or challenges around pedestrian and cycling safety, CAA wants to hear from you,” says Chan.

Investing in infrastructure improvements, including the proper maintenance of roads and bridges, is important to the vitality of local communities. CAA continues to advocate for longerterm dedicated infrastructure funding to help municipalities prepare, plan, budget and execute on repair backlogs and capital projects.

Repaving and repair work has been completed on many of the roads that have appeared on Ontario’s CAA Worst Roads list. Some examples include:
1) Burlington St. E., Hamilton
This Hamilton road has appeared on the annual list since 2008. It received the dubious honour of Ontario’s Worst Road in both 2017 and 2018, thanks in part to
potholes and crumbling pavement.
o A total of $3.3 million has been allocated to resurface and replace the lower part of Burlington St. E. with fresh pavement in 2018/2019.

2) Duckworth St., Barrie
This Barrie roadway claimed the third spot in the 2018 campaign. The first phase of a $10.3M reconstruction of Duckworth St. began last fall and the second phase will begin this spring.
Improvements of Duckworth St. between Melrose Ave. and Bell Farm Rd. are planned for completion in 2020.

3) Dufferin St., Toronto
Topping the list from 2012 to 2014, Toronto’s Dufferin St. has continued to appear on the Top 10 list of Ontario’s Worst Roads.
o As part of the City of Toronto’s Capital Works Program, Dufferin St. from Dundas St. W. to Bloor St. W. was repaved and sections of damaged curb
and sidewalk were replaced.

CAA SCO is calling on Ontarians to vote for their Worst Road today and join the community of drivers, cyclists and pedestrians committed to improving Ontario’s roads.
Nominations for CAA’s Worst Roads can be cast at caaworstroads.com until April 26. To encourage participants to act on their concerns, they will be entered into a grand prize draw to win free gas for a year, or one of 10 secondary prizes.
Once voting closes, CAA will compile a list of the 10 worst roads in Ontario, along with the worst roads in regions across the province. The regional top five lists will help shine further light on the state of local roads in municipalities across Ontario.

CAA will present the list of 2019 Worst Roads to local and provincial officials to help inform future funding and planning decisions.