Starting July 1, 2017, households in Milton will see an average 25 per cent reduction on their hydro bills as a result of Ontario’s Fair Hydro Plan.

Glenn Thibeault, Minister of Energy, and Indira Naidoo Harris, MPP for Halton, visited Milton Hydro to discuss how these savings will benefit local residents. In addition, as many as half a million small businesses across the province will benefit from this cut. Lower income Ontarians and those living in eligible rural and northern communities will receive even greater reductions, as much as 40 to 50 per cent. As part of this plan, rate increases will be held to the rate of inflation for four years. 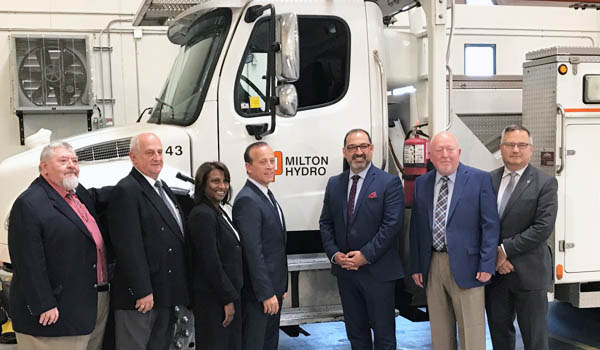 These measures include the eight per cent rebate introduced in January and build on previously announced initiatives to deliver broad based rate relief on all electricity bills. Taken together, these changes are delivering the largest reduction to electricity bills in Ontario’s history.
Reducing electricity costs is part of our plan to create jobs, grow our economy and help people in their everyday lives.

“People in Halton have made one thing clear: the need for real and immediate relief from rising electricity rates. Ontario’s Fair Hydro Plan will address these concerns by lowering electricity bills for all residential consumers by 25 per cent on average, and in the process, make life more affordable for families and bring fairer rates in the future.”
Glenn Thibeault, Minister of Energy

“Many Ontarians are concerned about the price they pay for electricity and the impact it has on their household budget. Ontario’s Fair Hydro Plan will significantly lower the monthly hydro bills of all residential consumers and help the most vulnerable.”
Indira Naidoo-Harris, MPP for Halton