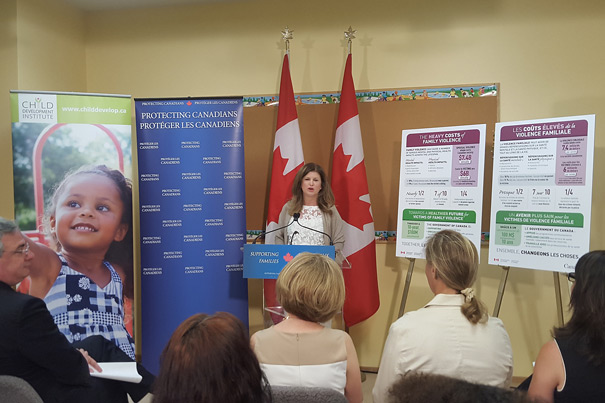 Today, the Honourable Rona Ambrose, Minister of Health announced that the Government of Canada is investing in five new community-based projects across Canada to support victims of family violence.

Family violence is a public health issue. Long-term exposure to violence can lead to substance abuse, mental illness, suicidal behaviours, and chronic illnesses such as heart disease.  In 2011, family violence accounted for approximately 25% of all violent crimes reported to police. This figure does not represent the full scale of the problem given that many incidents go unreported.

In February the Minister launched a Call for Proposals for organizations to submit applications to advance community-based projects that support the health of victims of domestic violence and child abuse and those at risk of these forms of violence.  Today’s announcement represents a total investment of more than $7.3 million over 5 years. The funding for these projects flows from the Government’s 10-year, $100 million investment for family violence announced in February 2015.

In addition to these community-based projects, the Minister announced that the Government is investing $100,000 in the creation of a global information system on violence prevention being developed by the World Health Organization (WHO). This system will pull together information on violence and its prevention at the international level to provide a global picture of the extent, nature and effects of interpersonal violence.