FLYGTA Airlines, a Canadian airline, announced it will add daily service to three more Ontario airports out of Billy Bishop Toronto City Airport (Billy Bishop Airport). The new destinations are Barrie, Kitchener-Waterloo and London, Ontario, and will be serviced out of Hangar 6, to the west of the main terminal at Billy Bishop Airport.

Details on the increased service were provided by FLYGTA Chief Executive Officer Chris Nowrouzi during a press conference at Billy Bishop Airport. Nowrouzi was joined by representatives from the three airports – all members of the Southern Ontario Airport Network – as well as a representative from the cities of Kitchener-Waterloo, Barrie, and Niagara. 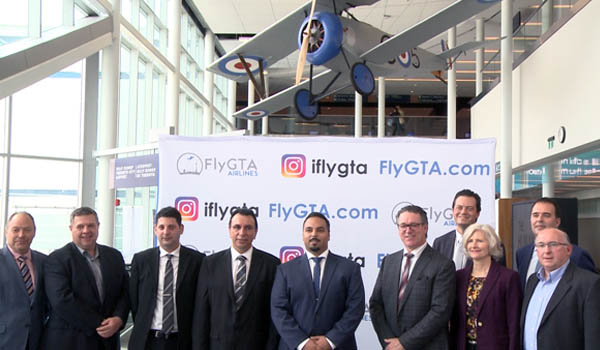 These new destinations are in addition to the Niagara District Airport in Niagara-on-the-Lake, to which FLYGTA has offered regular daily commuter flights since September 2016, with eight flights per day.

“We’ve been pleased with the success of our Toronto-to-Niagara flight service over the past year, and FLYGTA is excited to be able to add to our list of destinations in Ontario,” said Nowrouzi. “This will be a big benefit to travellers because we can turn long car rides on busy highways into short, comfortable flights that will get our passengers where they want to go in a matter of minutes.”

Not only will the new flights start to take some of the load off of the Pearson airport, they will also help ease traffic strain on Ontario’s highways.
Nowrouzi added, “Currently, a flight to the Niagara airport via one of FLYGTA’s planes that seat eight passengers takes just 12 minutes. That makes it an attractive alternative to business travellers or tourists.

“With service to more than 20 destinations through our main terminal and connections to additional Ontario markets through our hangar facilities with partners such as FlyGTA, Billy Bishop Airport is about connecting Toronto to the world and working within the broader Southern Ontario Airport Network to ensure the travel needs of the region are met. We are very pleased that our service offering continues to grow and congratulate FlyGTA on its new services,” said Gene Cabral, Executive Vice President of Billy Bishop Airport.

Alongside the announcement of the added destinations, FLYGTA confirmed its commitments to Niagara District Airport, which includes large scale heavy maintenance facilities, an Executive Terminal, and jet management, with the signing of a 50-year lease with the Niagara Airport Commission earlier this year. “We will connect the airports and cities in Southern Ontario in ways never before possible, and will ensure our developments at Niagara District will be at the forefront of the future of regional aviation in Ontario,” said Nowrouzi.