In celebration of Canada’s 150th year, and in recognition of Durham College’s (DC) 50th anniversary, Bank of Canada Governor Stephen S. Poloz returned to his hometown of Oshawa to visit the college and speak with students, faculty, alumni and community guests about Canada’s economic history. 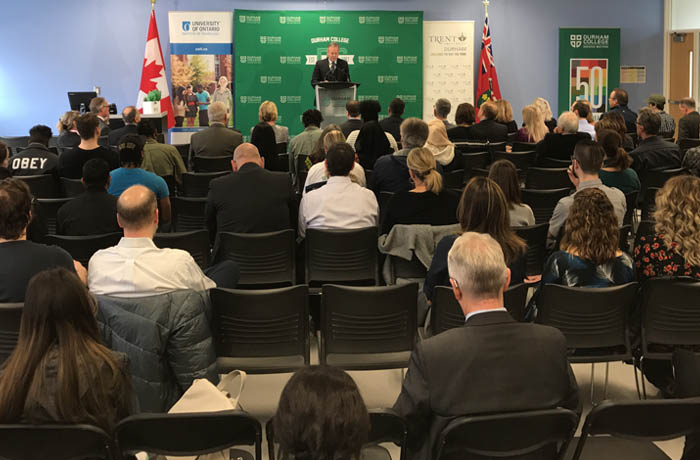 During his speech, which was hosted in partnership with the University of Ontario Institute of Technology and Trent University Durham, Governor Poloz took his audience on an exploration of the events and turning points over the past 150 years, that have helped shape the nation and its economy, as Canada evolved from a colonial outpost into one of the best places in the world to live.

Governor Poloz took care to connect aspects of Canada’s economic past with current issues at stake for the country. “What experience has shown is that the fears of openness are misplaced,” stated Canada’s chief economist. “Protectionism does not promote growth and its costs are steep.” He also noted that exposure to competition can in fact drive innovation.

In his introductory remarks, Governor Poloz also shared his own DC story in celebration of the college’s 50th anniversary, recounting his memory of when the college first opened its doors in 1967. With student residences not yet built, the governor’s family responded to the call for host families and welcomed three students from DC’s first class into their home.