Premier-designate Doug Ford met today with Chrystia Freeland, Minister of Foreign Affairs, and David MacNaughton, Canada’s Ambassador to the United States, to discuss the ongoing NAFTA negotiations and how Canada and Ontario will work together to protect jobs, including the steel, aluminum and automotive jobs currently at risk. 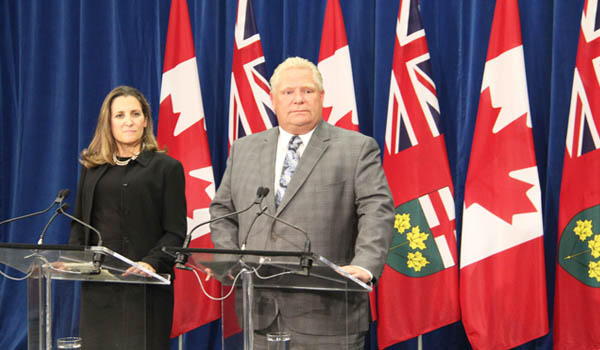 “I want to thank the Minister and the Ambassador for the productive and frank discussion we shared,” said Ford. “For my part, I reaffirmed that Ontario will stand shoulder-to-shoulder with our federal partners in these negotiations. Because with so many jobs at stake, we must stand united. Ontario will not sit on the sidelines.”

Ford also confirmed that the incoming government will act with urgency to implement its plan for the people in order to help create and protect Ontario jobs. Earlier this week, Ford met with leaders from Ontario’s auto and steel sectors to hear their perspectives on the steps Ontario can take to create and protect jobs.

“As I’ve said before, Ontario is open for business — we are open to trade and investment,” said Ford. “We’re going to create a business-friendly environment, with lower taxes, lower hydro rates and less red tape. We will make Ontario more competitive — and work hard to keep our economic ties with the U.S. strong.”

“I’m ready to take our case to American political and business leaders, to protect that trade and protect those Ontario jobs,” said Ford. “Because everyone benefits when we reduce barriers to trade. Canada wins. The U.S. wins. And Ontario wins.”