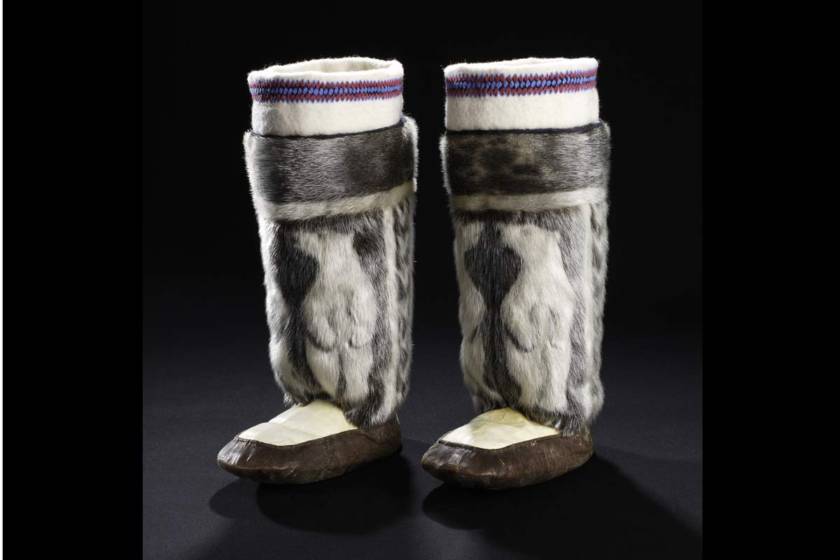 Arctic Bay, Nunavut, 1987: Fur inlay is a technique used by Inuit seamstresses to create highly intricate designs. A difficult challenge when creating this type of decoration is matching the nap of the different furs used to create the design so that all the hairs lie in the same direction. Collection of the Bata Shoe Museum. Photo credit: Image © 2016 Bata Shoe Museum, Toronto, Canada (photo: Ron Wood) (CNW Group/Bata Shoe Museum)

The Bata Shoe Museum is excited to announce the opening of its newest exhibition, Art & Innovation: Traditional Arctic Footwear from the Bata Shoe Museum Collection. Drawing from the Bata Shoe Museum’s extensive circumpolar holdings and building upon information gathered during museum-funded field research trips to Arctic nations, Art & Innovation offers rare examples of footwear, clothing and tools from the permanent collection and showcases the artistry and ingenuity of the makers while celebrating the diversity and beauty of traditional Arctic attire. From inventive technologies skillfully used to ensure survival and comfort to intricate decorative techniques used to proclaim cultural identity, the incredible range of circumpolar attire featured is a stunning testament to the art and technology of dress found in the Arctic.

At the top of the world and spanning over fourteen million square kilometers, the Arctic landscape may seem harsh and inhospitable yet the region is home to over forty distinct cultural groups. These communities have thrived for centuries by creating sophisticated clothing which has allowed them to embrace the unique opportunities and surmount the challenges of living in the Arctic.

The circumpolar collection of the Bata Shoe Museum is the result of the vision of our Founder Sonja Bata, the field work of several adventurous scholars and the generosity of makers from across the Arctic. From the 1970s to the 1990s, the Bata Shoe Museum Foundation supported research trips to the Arctic with two important objectives: to collect examples of footwear and clothing and to learn directly from makers about the ways in which Arctic footwear and clothing is produced and worn.

“When I founded the Bata Shoe Museum, my vision was to establish a global centre of knowledge on the history of footwear and shoemaking,” said Mrs. Bata. “I was particularly determined, in our fast changing world, to contribute to the documentation of indigenous shoe patterns and designs.  I wanted to understand how this footwear was made by local craftspeople, what the locally available materials were and how their patterns and decorative treatments reflected local cultures and customs. As a Canadian institution, we funded field research trips to the Canadian Arctic, but we also selected several diverse circumpolar regions and sent field researchers to Greenland, Alaska, Eastern and Western Siberia and Sápmi, the Sami homeland.  Every one of these shoes has a story to tell.”

The objects in the exhibition were collected in the field directly from the makers and wearers who shared their knowledge with museum researchers through interviews and demonstrations. The exhibit’s guest curators, University of Manitoba Professors Jill Oakes and Rick Riewe conducted the majority of these field trips and through their efforts have helped the museum amass an extraordinarily rich and diverse Arctic collection.

“Living, travelling on the land and working with Inuit in the field, we were introduced to the meaning and importance of traditional clothing, footwear and tools,” said Jill Oakes and Rick Riewe.  “As one hunter in Arviat explained, his skin clothing was more important than his skidoo or gun.  Our research focuses on facilitating the sharing of northern peoples’ stories that their clothing tell and documenting diversity throughout the circumpolar region.”

The opening of Art & Innovation coincides with the Bata Shoe Museum’s 20th anniversary celebrations, once again showcasing the museum’s role as a world-renowned cultural institution dedicated to exploring the role of footwear in society.

Beautiful and extraordinary, Art & Innovation:  Traditional Arctic Footwear from the Bata Shoe Museum Collection is a semi-permanent exhibition and will be on view for several years.